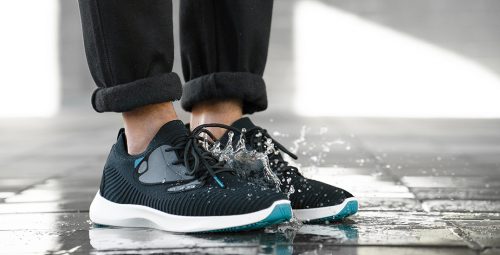 Vessi has just launched its new sneaker giving one of its most popular silhouettes a welcome revival.

The Vancouver-born shoe company officially launched Everyday Move on Wednesday. The sneaker follows its predecessor, the Everyday 1.0, which the company says is their most popular silhouette.

It also comes a year after the release of The Weekend, the brand’s very first casual sneaker and its take on a classic court silhouette.

Andy Wang, one of the brand’s co-founders, told Daily Hive that Everyday is Vessi’s best-selling shoe. But with everything they’ve learned since its release, it was only fitting that the model received an upgrade.

“I think it was a great shoe, but the technology, the construction and the things we’ve learned since then – there’s been a lot,” Wang said in an interview.

“Since people love this style so much, we felt we had to do the right thing for our clients to make this style the best it could be. We decided to tackle this first so people can really experience Vessi’s full potential. “

And while the silhouette is built from the roots of its predecessor, there are plenty of new features that set it apart from the rest of the Vessi family.

The upper of the shoe has been designed with a whole new look, featuring a vegan lace cage that looks like puddles and a wavy design all over the outer quarter of the shoe. The ankle collar has also been redesigned to give an elegant aesthetic and make it easier for wearers to put on and take off.

The rear part of the shoe features a heel tab, which was added after being in high demand by Vessi fans, as well as a heel counter to ensure a locked-in fit.

“It adds a lot more structure than we thought of the previous model before,” says Sam Chian, head of product design and development. “As you go up a hill, you won’t feel it slipping as much. “

Perhaps the biggest and most welcome upgrade is a complete overhaul of the midsole and outsole. Chian says it was a feature that was often brought up in customer feedback and something that a lot of work was done on during the development of the sneaker.

“The main thing, for the midsoles, we have improved the compound over what we were using before,” he explains. “So we used a lot of compression molded EVA and now we use injection molded EVA which has more bounce, more durability and more support.”

Chian, who spent several years in the product design team at Adidas, adds that comfort is a characteristic that can always be pushed and continuously improved.

“When we were working as a product team to take the product to the next level… it just felt like we were raising the bottom. We wanted to take the feedback and make sure that this stand could be worn all day. “

But don’t worry, even with all the upgrades, the silhouette still sports the same waterproof design that Vessi fans have grown to love. And Chian firmly believes that anyone who was a fan of Everyday 1.0 will also fall in love with this model.

As for what Vessi has in store for the next few months, Wang also left some clues to look forward to.