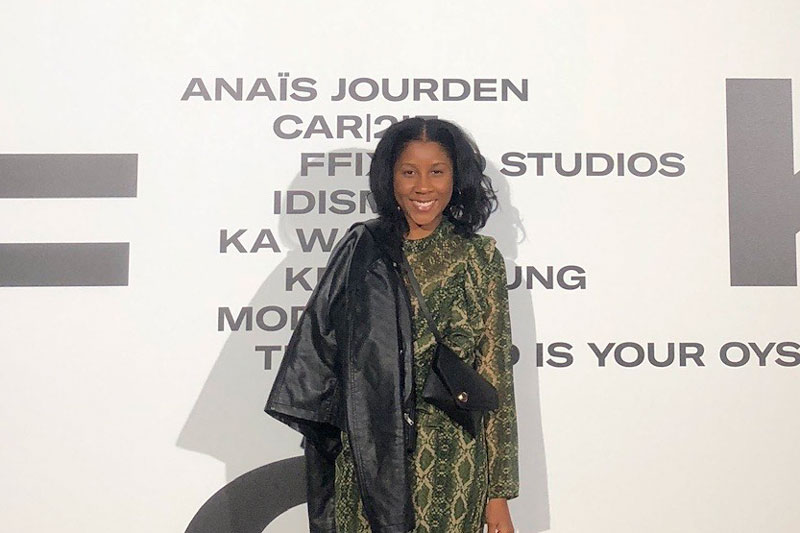 Thanks to a Multimedia journalism diploma, Taylor students are exposed to a wide variety of fields and skills. A basic foundation is required in different types of journalistic media and offers electives and concentrations with courses in Film and media production, Public relations, Professional writing, Computing, and Sports management can be taken to meet major requirements.

For Danielle Barnes ’18, her design experience, her writing training and her past semester internship in New York prepared her for her Master of Arts in Fashion Studies from the Parsons School of Design. She now works as a social media manager and expects a long career of creativity.

While at Taylor, Barnes participated in Gospel choir, Echo (Taylor’s student-run newspaper) and The Ilium, Taylor’s yearbook. Barnes is one of many journalism students who have held writing, editing and design positions on both publications.

She encourages any high school or college student who is unsure about the career they want to take their time and not feel like they have to figure it all out right away. Instead, she suggests choosing a program where you can try all kinds of skills and experience different experiences.

“A lot of people try to make it look like ‘oh you should know’,” Barnes said. “But I think sometimes it’s really impossible, especially for (journalism). There is so much that you could get into, and I’m the type of person who wouldn’t want to just get stuck in something I don’t like.

Barnes especially enjoyed the design courses required in Taylor’s core multimedia journalism and took as many design and Adobe Creative Suite courses as she could in Graphic design through the artistic department. She credits these courses with having sparked her interest in design.

Like most Taylor students, journalism students have the opportunity to study off campus for one semester, and often go to New York, Ireland, Washington DC and Lithuania. Barnes completed a semester at King’s College in New York City, where she took courses in business writing, magazine writing, and did an internship at a digital news company. There, she toured the city to report and write every week.

“It was pretty scary at first because I had never been to town before, but I knew I had always wanted to, so I was excited about the changing environment,” said Barnes. “It was so exciting and also terrifying because it was such a small business, and I did a lot of reporting there, especially for the crime and chaos news. Nonetheless, it was super fun. I really enjoy this program.

The internship gave Barnes an experience of independence she had never had before. She enjoyed the experience of getting to know New York City and the opportunity to discover a new side of herself there. She credits her time there for giving him directions on what her next steps looked like after graduation.

Before her final year at Taylor, Barnes had a very general idea of ​​what she wanted to do after graduation. She only knew Parsons from the series Project track, but after someone told her about the school’s fashion curriculum, her interest was piqued. It is an interdisciplinary program, combining communication, marketing and fashion. Many of the people in her program have embarked on marketing and curation, and often have backgrounds in public relations and journalism.

Without realizing it, his candidacy earned him acceptance on the Parsons campus in Paris. Although she was reluctant to take such a step, the request to transfer to New York would have been as long as the first one, so she decided to give it a try.

“It’s been a crazy year,” Barnes said. “I think the most important thing was the culture shock for me, because I don’t speak French. I was living on my own, so it took a while to get used to it, and a lot happened that year. My apartment has been broken into twice, and one of the times I was in the apartment. It was 2 am and it was a big shock to me.

Although his time in Paris was a great learning experience, Barnes decided to return to New York for his second year of Parson’s due to the greater choice of graduate courses they offered.

Back in New York, Barnes felt she was truly thriving in her program. She took courses that interested her, was able to join different groups and organizations, and got to know many people in her field of interest.

One of her favorite classes was a curation class. She and a team worked with a Parisian museum and were assigned a piece of clothing to learn how to exhibit. Her team’s garment was a 1960s Givenchy dress worn by Audrey Hepburn. At the end, they were able to see their work exhibited in the gallery.

Barnes decided to write her thesis on media portrayal of female tennis players. She initially focused on the history of male dominated tennis and how women have slowly entered the sport, but are held to different sporting and fashion standards. She then took that research and wrote an analysis on the portrayal of Serena Williams in the media over the years.

For Barnes, dating Parsons helped her realize the wide variety of career options she had with a journalism degree. She knew she didn’t want to get into print media, but was looking for something more creative instead. Throughout the program, she got to try out all kinds of positions and meet all kinds of creative people.

Starting a career during Covid-19

Barnes graduated from Parsons in the spring of 2020, as the world came to a halt due to Covid-19. Being in New York City, at the height of the onset of the pandemic, she was left to search for work alone during the lockdown. After a brief stint in a non-profit organization, she set out in search of something more creative. She worked for some time with Group M, a corporate social media agency, where she managed accounts for clients such as National Geographic.

She recently accepted a new position as Marketing Coordinator for Fairstead, a real estate development company based in New York, where she currently edits texts, manages social media and creates content.

“I know for sure that I want to be a part of the creative industry,” Barnes said. “Now that I have held various positions in the creative field, I cannot say for sure what I want to do. But I think with each of them there was a spark, and I think I’m just going one step at a time. A career in the creative industry can take you in many different directions. What really strikes me is the ability to create meaningful work and inspire people. This is what I really like about my field!

To learn more about Taylor’s Multimedia Journalism Major and Concentration options, explore careers they offer or talk to Dr Alain Blanchard, associate professor of journalism. Ready for the next step? Register for your visit today.