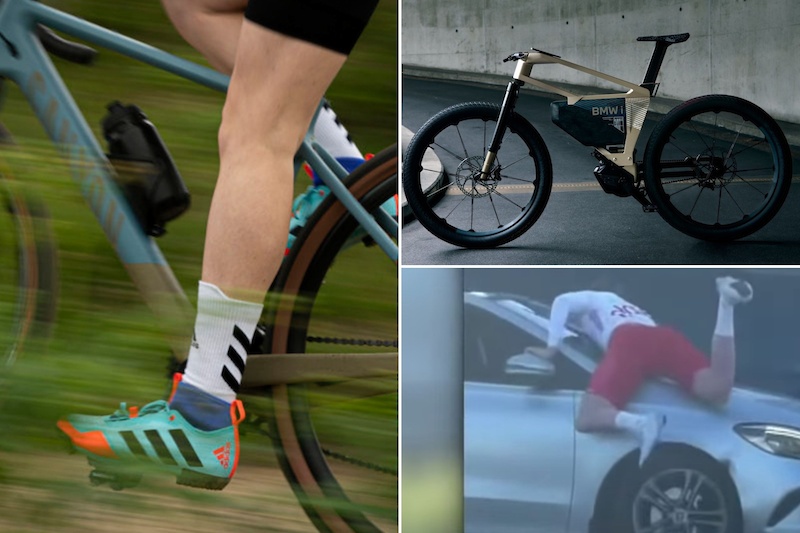 We use Slack as a workplace communication tool at Pinkbike and we have a # random channel we use to share an assortment of videos and stories from all over the cycling world and beyond … We thought a few moments from last week were too good not to be shared with an audience wider, so here are some of the highlights. Adidas all-terrain shoe
On the heels of its Velosamba shuttle / soccer shoe released in March this year, Adidas has unveiled an all-terrain cycling shoe for the first time. As the name suggests, the Gravel cycling shoe is aimed more at railroad enthusiasts than mountain bikers, but it shows that Adidas is ready to offer shoes for a wide variety of riders. Who knows, maybe an iconic sticky flat pedal shoe is on the way? / s
Cycling tips reports that, like just about every other shoe in the category, Adidas’ offering features a two-bolt SPD pattern on the sole. The upper is made from recycled Primegreen materials, and Adidas promises “no virgin polyester” has been used in their construction. The sole is a synthetic with TPU “walking shells” and there is also a cuff to prevent debris from entering the trails.

The shoes are available in a number of markets and are priced at $ 170 / € 180, but given that they were released a short time ago, there’s probably not much of a chance you’ll be looking for one. pair now.

Here’s one of the most shocking road rage videos we’ve seen in a while. We don’t know what led to the incident, but there is no justification for this driver hitting a cyclist and crashing his bike in the process. At the risk of showing our prejudices, it seems closer to an assault or attempted murder than the “moment of madness” described by the local journalist.

BMW has released an electric bike concept that makes most of its competitors look anemic in comparison. The i Vision AMBY includes a number of top mountain bike components (including the Intend suspension) and a massive 2000 Wh battery that provides a range of 300 km. Of course, this is not exactly legal in its current form.

So why has BMW made an electric bicycle that must be registered and insured to be legal anywhere in the world? Well, this is more of a legislation than a viable product. The German automaker said: “In the absence of any existing legal framework for such a vehicle with a modular speed concept, the ‘AMBY’ vision vehicles set out to push for the introduction of such a. legislation and, therefore, developments of this nature. ”

Basically the auto industry has seen the success of e-bikes and wants a piece of that pie as well, but they know the bike industry is already well ahead under the current rules, so instead , it’s about changing them. To deepen this legislative battle, there is a detailed article on Cyclingindustry.news, here.

UCI’s fun-looking mountain bikes
The UCI recently unveiled a fancy new website and it made our life a lot easier covering the events at Snowshoe, but they didn’t get it all. The link in the ‘Mountain Bike’ section certainly features bikes ridden in the mountains but seems a bit closer and …
..Whoops.

Have fun on boards in the woods

Bikes are not the only tool to let off steam in the woods as these two videos show. First, 50to01’s Max Nerukar hit the Thrasher homepage with this ATV skateboarding party, and then there’s Benny Milam’s Summer Dream snowboarding party in the Thawed Woods of Wisconsin.
The terrifying perspective of Travis Pastrana
From World Cup winning runs to massive Rampage Falls, we watch a lot of POV videos here at Pinkbike, but few are as terrifying as Travis Pastrana’s record breaking time on Mt Washington.

Speaking of spooky POVs, this one comes from a soapbox race through the streets of Ecuador and sees the runner throwing speed bumps and hitting 50mph. Here is a deep dive into the culture of racing on The Drive, here.