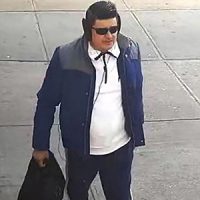 Jewelers’ Security Alliance (JSA) is offering a $5,000 reward for information leading to the arrest of the person who beat and killed Arasb Shoughi, the owner of Global Pawn Shop in the Jamaican neighborhood of Queens, NY

Shoushi is the first industry-related homicide of 2022, the JSA said.

According to press accounts and JSA information, on March 28 at around 1 p.m., a suspect (pictured) walked into Global Pawn, apparently trying to sell watches. At one point, violence broke out.

The man led the owner to the back of the store and beat him violently with a metal rod. The New York Police Department released graphic video of the beating, which can be seen here. Police do not know the motive for the attack, according to reports.

Shoughi died from serious head injuries on April 17, three weeks after the attack. The suspect escaped from the store with several pieces of jewelry.

The suspect is described as 5 feet 7 inches tall; 150 pounds; and with an average build and complexion. He entered the store wearing a green Adidas baseball cap, black face mask, dark blue jacket with a hood, black backpack, dark green pants and black shoes, according to the New York Post. Later photos showed the suspect wearing sunglasses and earmuffs.

JSA President John Kennedy recounts JCK the suspect may have fled New York and warned jewelers to be on the lookout if this person enters their store trying to sell jewelry.

“Look at that guy’s face,” he said. “He can appear anywhere.”

Any jeweler who sees this person or has information related to this incident should contact law enforcement or the Jewelers’ Security Alliance hotline at 212-687-0328 or [email protected] All advice will remain confidential.