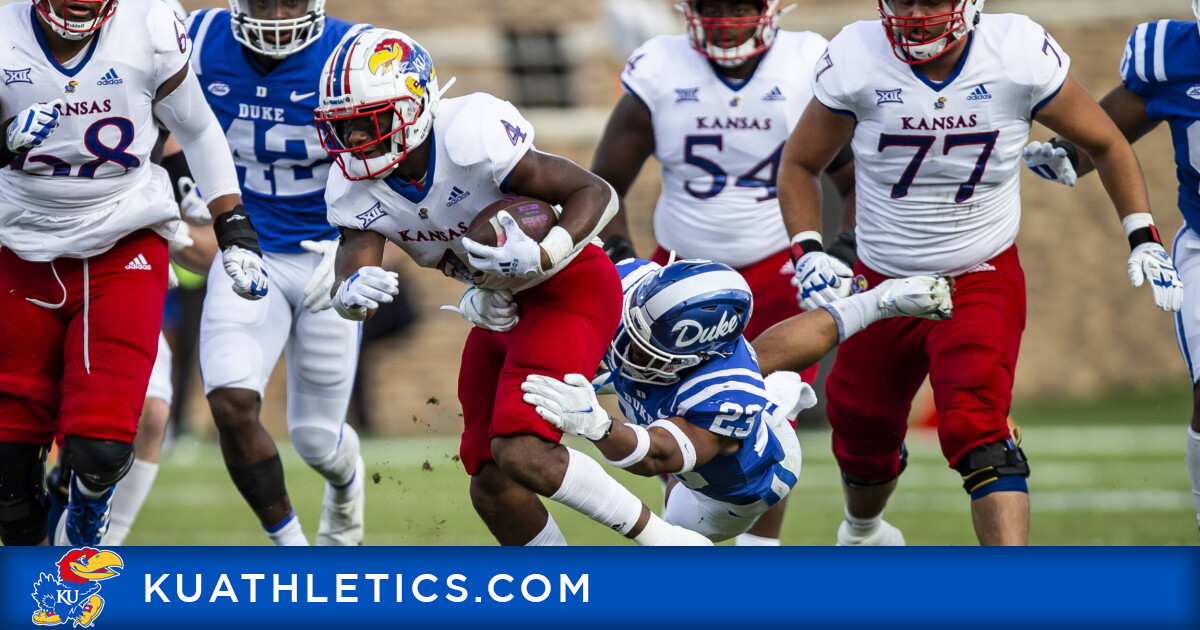 DURHAM, NC – The Kansas Jayhawks totaled 530 attacking yards and had a strong performance from quarterback Jason Bean, but the Duke Blue Devils outlasted the Jayhawks 52-33 at Wallace Wade Stadium.

The Jayhawks are down to 1-3 this season, while Duke has gone down to 3-1.

Bean completed 19 of 32 passes for 323 yards and two touchdowns in the loss, while adding 54 rushing yards. Receiver Trevor Wilson broke the 100-yard mark with five catches for 122 yards and true first-year running back Devin Neal had his first 100-yard rushing game, gaining 107 yards and a touchdown on 17 carries.

But Duke’s offense totaled 607 yards of total offense and the Blue Devils scored 31 points in the second half, including 21 in the third quarter to gain control of a home and away game.

The Jayhawks then took advantage of Durant’s fumble late in the quarter when Hayden Hatcher recovered him at the 18-yard line to give Kansas a prime position on the field. Kansas scored three games later when Bean found Locklin for a 20-yard touchdown pass to make it 10-7 for Kansas.

Again, however, Kansas had an answer, thanks to Locklin. Locklin scored on a 36-yard run with 9:20 left in the first half and Borcilla scored the extra point to make it 17-14. Holmberg found receiver Jalon Calhoun later in the quarter for a 26-yard touchdown to give Duke the lead in the first-half round-trip.

The Jayhawks closed the scoring in the first half when Neal scored a meter to bring Kansas to 24-21 at halftime.

Kansas extended their lead in the first practice of the second half when Borcila connected from 29 yards to make it 27-21.

Duke, however, scored three touchdowns in under six minutes in the third quarter to take a 42-27 lead before the fourth. Jordan Waters had a four-yard touchdown run and Holmberg scored two rushing touchdowns for the Blue Devils.

The Jayhawks got a 61-yard touchdown in the fourth quarter when Bean found Kwamie Lassiter II for the longest catch of his career. That score made it a 12-point game with 8:42 to go, but Duke added another Holmberg touchdown with 5:23 to go to close the game.

The Jayhawks will be back in action on Saturday, Oct. 2 on the road again at Iowa State. The kick is scheduled for 6 p.m. and will be broadcast by FS1.